Re-opening of churches in the Thames Valley Circuit

Although most churches are again open every week, all have restricted seating due to social distancing. If you wish to attend a service, please check there will be sufficient space, and book your place!

For those unable to attend (e.g. while self-isolating) services on ZOOM for the entire circuit continue to be held every Sunday. Contact the Circuit Administrator or the circuit webmaster for details of how to join.

Colnbrook & Poyle are currently holding a service every Tuesday at 10.30 am.

Our mission is to spread the Good News of Christ
in the villages of Colnbrook and Poyle.

Colnbrook & Poyle United Church is situated in the centre of Colnbrook High Street, on the south side.

Our Church is a combined Methodist/URC (United Reform Church) rural church with a reputation for its warm Christian welcome, and friendly family-like atmosphere. The building is a small modern church, light and airy, with full central heating. We enjoy a varied preaching experience from both ordained and lay preachers, mostly Methodist, with occasional guest preachers from other Christian denominations.


Our regular Sunday Service is at 10.30 am, with a united service held once a month (usually on the second Sunday) with St. Thomas's C of E church, alternating between the two churches.

As part of our outreach programme, we collect groceries for Slough Food Bank.

Our Fellowship meets on the first Tuesday of each month at 2.30 pm. We have a guest speaker or a short service. We also have a bring and buy stall.

You are warmly invited to come to any of our activities! 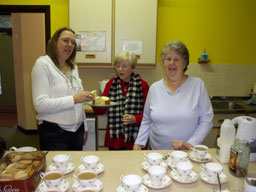 The church premises are easily accessible to wheelchair users, and there is a purpose-built accessible toilet. We have a full loop system in the church for those with hearing aids. Large print hymn books are also available. There is a fully equipped kitchen. Our car park has space for six or seven vehicles.

Our premises are also let to village organisations on a regular or ad-hoc basis.

If you would like more information, or to make a booking, please contact us and your request will be forwarded.


A HISTORY OF COLNBROOK AND POYLE UNITED CHURCH 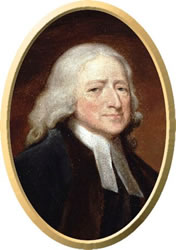 John Wesley was here! When he rode along the Great West Road between London and Reading or Bristol, he passed through Colnbrook, which is mentioned in his journals:

1747. Sunday, 9th June. In the evening I rode to Colebrook [Colnbrook?]; on Monday to Marlborough; and on Tuesday to Bristol…

1750. Tuesday 27th March. I at length forced myself from London. We dined a little beyond Colnbrook…

It would appear that Primitive Methodism in Colnbrook began as an outreach of the Reading Circuit, which was formed in 1837. By 1839 the Reading Circuit had established a mission in Windsor, and in July 1839, the Windsor Mission started weeknight services at Colnbrook. Over the next few years these may not have been held on a regular basis, as Colnbrook is only included in some of the preaching plans prior to 1848. To add to the confusion, the 1847 edition of Kelly's Directory states that the Primitive Methodists had a place of worship in Colnbrook! 1

However, the Colnbrook Primitive Methodist Society was established, and a Sunday School started some time before 1856, when the Sunday School held its Anniversary and the children's annual treat. 2 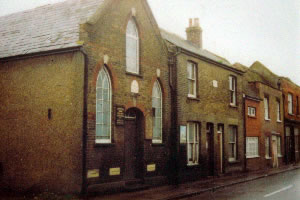 By 1859 the Society was strong enough to consider having its own premises. A Trust was formed, and a piece of land (with an unoccupied cottage) fronting onto the High Street was purchased for £105 on 14th June 1859 from Mr William Buckland Thomas. Fast work!!! A chapel, built in the Gothic style, was opened on 4th September 1859 by Rev Thomas Church… It cost £282, and the debt was cleared by March 1875.

Throughout the life of the church there were many stalwarts who worked tirelessly to promote the Methodist cause, as illustrated by the plaques in their memory, such as this one in memory of Healen Roberts.

The two terraced houses attached to the west side of the Chapel were purchased, with one used for meeting rooms, and the other to house the caretaker. In 1931 electricity was installed, and a new organ purchased.

After Methodist Union in 1932, the word "Primitive" was deleted from the tablet over the doorway, but long afterwards the older inhabitants of Colnbrook still referred to it as "the Prims". The Chapel regrouped to become part of the Staines & Feltham Circuit. But being on the borders of circuits, there were also strong links with churches in what is now the Thames Valley Circuit and the Girls' Brigade was connected to them. (One leader of the Girls' Brigade was commissioned at Ledgers Road Methodist Church.)

In the 1950s the Trustees considered building a new Church Hall. This became possible when Frank and Jessie Wicks, the owners of neighbouring Louise Cottage, offered to sell it for £100 — an offer the Trustees accepted gratefully, and Henry and Mary Rayner gave the property on the other side of Louise Cottage, both to enable the Chapel to be enlarged. Although Louise Cottage was demolished, various plans to rebuild the Chapel were produced, but did not proceed.

The Rayner family are local farmers and landowners who had very strong links with this chapel. [They continue to be actively involved in the community. Councillor Colin Rayner, who represents the Horton and Wraysbury ward in the Royal Borough of Windsor and Maidenhead, became Mayor in one of the most high profile years in the borough's history — with Her Majesty The Queen's Diamond Jubilee and the Olympic and Paralympic Games at Eton Dorney in 2012.]

The chapel was a lively and active place. There were parades through the village by the Girls' Brigade and the Boys' Brigade. A great time was held at the annual Garden Party (and also contributed to fund raising!) and at many other events. One fascinating aspect of this era was that the organ and the piano were played together regularly — quite a feat!

Older members still have memories of wonderful Harvest Festivals, and the range, quality and quantity of the Harvest gifts and decorations from this farming community.

The years passed, and in 1970-1 the Chapel was modernised. The old pews were replaced with chairs, new heating and lighting was installed, and redecoration took place. Double-glazing was installed, both to conserve heat and to reduce the noise from low flying aircraft.

In 1975, Colnbrook transferred to the Slough Circuit, on the premise that there was a stronger geographical link with Slough than with Staines.

Early in the 19th century, Messrs East and Ibbotson of Wooburn purchased some paper mills in the hamlet of Poyle. In 1814, they set aside a large room in the mill, for the benefit of the workers, as a "church" for the purpose of holding religious services, and also established a Sunday School. After Mr Ibbotson's death, his sons carried on the work. In 1823 they gave a small piece of ground where a Congregational Chapel3 was built, opening on 12th November 1823. It was built of brick with small turrets on either side of the front gable. A resident minister was appointed in 1826. There was no resident minister for some years after 1889.

In 1956 the church was in the care of a lay pastor. It then had 54 members, as well as 26 children in the Sunday school.


There had always been strong ecumenical links between the various churches and chapels in Colnbrook and Poyle. This included an annual march by the young people's organisations, with banners waving, from the Methodist Chapel in High Street to the Congregational Chapel in Poyle.

By the early 1980s the congregation of Poyle URC had dwindled and the building was in very poor condition. This coincided with the deteriorating condition of the Colnbrook Methodist premises.

In February 1984, the members of Poyle United Reform Church started to share worship with the Colnbrook Methodists in the Methodist Chapel.

After detailed consultation (at all relevant levels) the two churches agreed to sell the URC Chapel, demolish the Methodist premises (including the two terraced houses) and build a new "United Church of Colnbrook" on the High Street site. The proposed Church was costed at £261,500, including the land which was valued at £100,000. The Poyle Chapel was sold for £90,000. Thanks to grants, the sum left to be raised by the combined society was £30,000.

The two churches entered into a formal Sharing Agreement on 7th July 1987, with both denominations sharing the responsibility for providing preachers.

The former Poyle URC closed in 1987. The last service in the old Colnbrook Methodist Chapel was held on Palm Sunday, 19th March 1989. The buildings were demolished and work commenced on its replacement in August 1989.

The official stone-laying took place on 14th October 1989. The stone was laid jointly by Rev Colin Rowe, Chairman of the London South-West District, and Rev Geoffrey Bending, President of the URC Chiltern District: 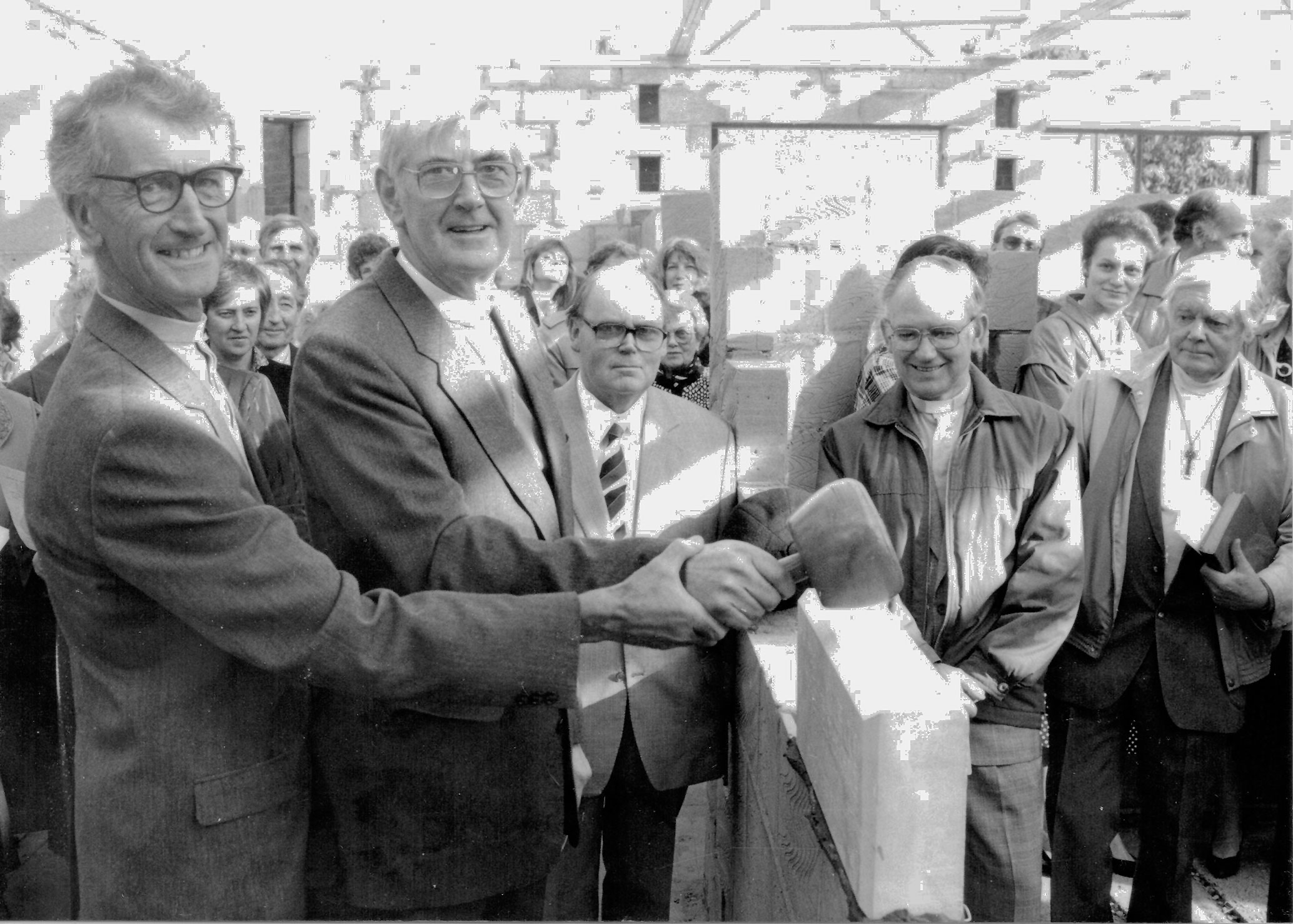 While the congregation was without a building, they gratefully accepted the invitation to hold their services in the Parish Church of St Thomas - a further illustration of the good ecumenical relationships within the villages.

The official opening was held on Easter Saturday, 14th April 1990, in the presence of Rev Colin Rowe for the Methodists, and Rev Michael Davies, Moderator of the Thames North Province of the URC. 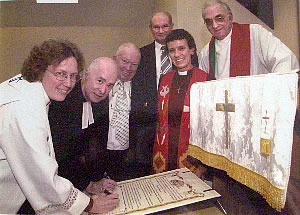 On 16th January 2005 a Local Ecumenical Partnership (LEP) was founded, and the Colnbrook & Poyle United Church had truly become two former congregations worshipping and working together as one!


Grateful thanks to Mrs Margaret Walters for sharing her memories!