This page is about the circuit's current staff. Choose a picture for more information. You can find out which ministers have been appointed to the circuit (and its predecessors) from 1815 to the present day. There is a checklist in Our Circuit's History. 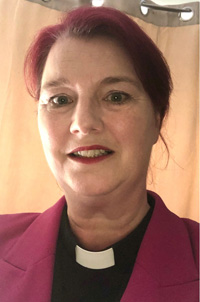 Vicci was in the performing arts as a singer/actor, teacher, director and conductor before training for the Methodist Ministry at Wesley House, Cambridge. She was then stationed to the Teddington Circuit for seven years, the last three of which she served as Superintendent. She was also Convenor of the Social Responsibility Commission of the London District.

Margaret worked as a teacher first in Guildford and then Thanet between 1978 and 2002, finishing as Head of Faculty. This time included seven years in Whitstable as a full-time Youth and Community Worker, and as leader of the Duke of Edinburgh's Award scheme in the area.

Through school and youth work, she qualified as a badminton coach and later as a fencing coach! After a career break to enable her to care for her mother, she returned to teaching in 2007, this time in a secure training centre.

Margaret is single with one surviving sibling. She and her sister Jennifer are both religious historians who share a lot of interests including a love of Guiding and for visiting Malta, which is an annual activity.

A lifelong Methodist, Margaret has held many posts in her various local churches and circuits, plus a time as District Secretary for worship among young people. Margaret has wide ecumenical experience, and has been heavily involved in leading and working in ecumenical youth projects. She has worked in town and city chaplaincy, and provided pastoral care in schools. After responding to the call to become a minister, she trained for the Methodist ministry at Wesley House in Cambridge. Margaret completed her training while in the Thames Valley Circuit, and was ordained and welcomed into full connexion at the Methodist Conference in Birmingham in 2014.

Her hobbies include playing the keyboard and "prayerful painting" (which uses art and creativity for healing). Since coming to the Thames Valley she has joined the Trefoil Guild and enjoys regular Guiding activities.

Anne was born in the UK and was one of the first members of her family to go on to higher education reading successfully for a degree in Mathematics at Goldsmiths College, University of London.

A gap year was spent in South Yorkshire in the heart of the coalfields, working as a lay volunteer where she went down to the coalface of Houghton Main Colliery and saw first-hand the conditions of mining families prior to the devastating miners' strike of 1984-85

A career in education beckoned, and Anne studied for her Post Graduate Certificate in Education at the University of Bath, taking her first teaching post at a local comprehensive school. Anne and her husband, Owain, spent two years in the Netherlands. Anne decided to fulfil a long ambition to learn how to touch-type and started a course at the prestigious Schrovers Instituit. Supply teaching offers at the British School interrupted progress, and Anne was eventually thrown out for poor attendance! An offer to work for the Dutch Education Department in a new scheme to provide English-medium education within a Dutch Comprehensive school followed. She set up the Mathematics and Computing department, and the Parent Teacher Association, in the fledgling 'English Section' at Wolfert van Borselen School in Rotterdam. The former 'Engelse Afdeling' is now known as Rotterdam International Secondary School comprising 47 teaching staff and 200 students.

Return to the UK saw a move to Scotland and to motherhood. Various moves followed as Owain's work dictated with a family home established in South Wales in the late 1990s; Anne and Owain became members of Chepstow Methodist Church.

Anne contemplated a return to teaching while also exploring and producing creative and alternative worship (precursors to 'Fresh Expressions'), and youth worship, with a small team in her local church. Foundation Training at Wesley College provided a structured environment for vocational discernment with placements within local church ministry, prison and university chaplaincy. Visiting and sharing with those in prison in particular, brought home the need to show, tangibly, the love and compassion of God; a recognition of one's own vulnerability; and the need to build and grow communities where God's all-inclusive love is made real.

Ministerial training was undertaken at St Michael's College, Llandaff, alongside Anglican ordinands during which Anne completed her MA in Theology and Ministry at the University of Bristol. MA research led to an invitation to be part of the Gender Justice Committee, which she went onto Chair. Anne chaired the Gender Stakeholder Forum under the interim Equality, Diversity and Inclusion (EDI) interim architecture, and then became a member of the EDI Committee at its formation in 2015. Anne joined the Council of the Central Finance Board (CFB) in 2017 and became a member of on the Joint Council on the Ethics of Investment (JACEI) in 2018. Anne has a continuing passion for matters of social justice and social inclusion.

A keen artist, working in primarily with acrylics on canvas, Anne likes to paint abstracts, to read trashy novels and watch sci-fi series on Netflix.

Pauline joined the Thames Valley Circuit in 2019 in the role of Circuit Administrator and is now working alongside and supporting Rev Vicci Davidson.

Semi-retired, she worships at St Mary's, Hitcham, where she co-ordinated the Young Church for many years.

She is the Benefice Administrator in Eton Wick and Boveney, and has been Parish Administrator for Hitcham Parish. She is currently Secretary to Churches Together in Burnham and Taplow, and brings a lot of experience to her new role.

She was integral in the setting up and running of The Well@Lent Rise, which for some years has been working closely with Burnham Methodist Church.

Pauline has two grown up daughters, Jamie and Hannah … and is delighted to have become both a Granny and a Mother-in-Law in the space of six months. God is good!