The Church at the Crossroads

Burnham Methodist Church is at the junction of Lent Rise Road and Eastfield Road. We are a small friendly Church — very welcoming to visitors and new members alike.


Our Sunday Morning Service is held at 10.30 am, and Holy Communion is celebrated monthly. Our Sunday service always makes provision for children, who leave the service with the group leaders, and rejoin us to share their activities later on.


A fortnightly informal Bible Study group runs on alternate Friday mornings at 10 am and CAMEO (Come And Meet Each Other) is a senior citizens' lunch club which meets every Thursday from 11 am.


Lent Rise Toddlers Group is a pre-school group where children and parents / guardians meet together and socialise. It meets during term time on Tuesdays between 9.15 and 11.15 am. We also take regular term-time Open the Book sessions at the local primary school. 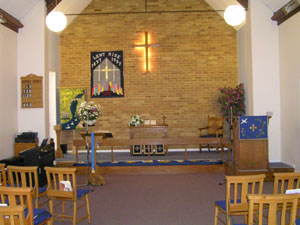 We have strong ecumenical links with other local Churches and enjoy opportunities to share worship and fellowship with them, and our Methodist friends throughout the Circuit.

Our Vision is that our Church will be a community, built on worship and prayer, that celebrates life in all its diversity, where all feel welcome, included and valued.

Our Mission is to


If you would like a pastoral visit or wish to discuss a baptism or marriage, please contact our minister. 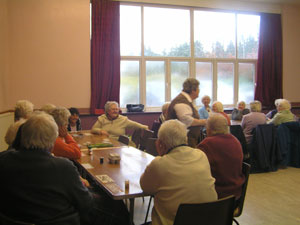 Our church is part of an active gathering of Churches Together in Burnham. We have strong links with the community, and extensive use is made of our premises. Weekday activities include a Senior Citizens' social group (under the auspices of Burnham Community Action) held on Monday afternoons, known as the Monday Club!


A special service, Hanging the Greens, takes place on the first Sunday of Advent each year.


The Church works closely with The Well @ Lent Rise, a Christian outreach group. The Well uses our premises on Wednesdays, starting with Wake-up Wednesday from 7 am which offers hot drinks and food to secondary school students waiting for the school buses. This is followed by The Meeting Place, a drop-in coffee morning for the local community. The Family Focus Group meets on Friday lunch-times and The Memory Book, an older people's group, meets on Friday afternoons. To find out more, visit The Well's website.


Although few in number, there is a strong spirit of mission and purpose for the work of God in our area. Our members are actively involved — not just in the activities listed above — but, for example: Our Church is wheelchair friendly with full disabled access and purpose-built toilets, and a hearing loop. There is a large Hall with a stage area, two classrooms and a kitchen. These are available for lettings, and are in regular use throughout the week.


We have a small car park for about 12 cars.


You are warmly invited to contact us for more information about any of our activities or to discuss usage and bookings of the premises.


A HISTORY OF BURNHAM METHODIST CHURCH

There has been a Methodist Church at Lent Rise, Burnham, since 1897. The one-time hamlet of Lent Rise lies in the South-West of the village, bordered by Slough to the South, and Taplow to the West. The word Lent comes from the Old English word meaning Shelter. Lent was one of the three great open fields of Burnham, the other two being Tockley (Tockley Road lies off Gore Road) and Brightwell (or Britwell, now part of Slough) to the East. The original Bright Well still exists — in a Burnham garden. 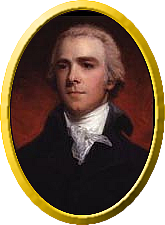 Methodists had been meeting spasmodically in the Burnham area since 1830, as is shown by the Wesleyan Circuit Plan for the time. In 1832, Lord Grenville, Lord of the Manor, gave the Primitive Methodists permission to build a chapel at Littleworth Common. However, the church was never strong in membership. Possibly the estate workers thought they might lose their jobs if they left the Anglican church! By 1876, the Primitive Methodist cause was failing, and the building eventually became the Dropmore (St. Anne's) Parish Room.


The establishment of Methodism in Burnham was due to the efforts of the Wesleyan Methodists in Maidenhead. That thriving church had been witnessing since 1829, initially in Bridge Street, later in High Street.1 The Maidenhead Leaders' Meeting Minute Book of January 1861 records:

This meeting hears with pleasure that Mr Cleare has commenced a New Class in Burnham and recommends him to persevere.

Charles Cleare died in 1898. The family name is still well known in Burnham. 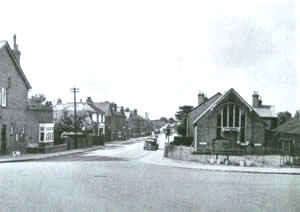 The Burnham Methodists had various meeting places, including one in Taplow. Although numbers were never high, at the Quarterly Meeting of the Circuit in March 1896, permission was given for the erection of a new Wesleyan Chapel at Lent Rise, on the corner of Lent Rise Road and Eastfield Road, then known as Nearway Road. The foundation stones were laid in November and the builders lost no time ... the opening services were held on Easter Monday 1897! 170 people sat down to tea. Would there ever be a Methodist event without tea!? Apparently it was a very windy day and the tea tent nearly fell down!

In 1906 a tin-roofed schoolroom was built, costing £160. The Congregation was small and the fund-raising efforts must have been very creditable. For a number of years the membership was never large; Lent Rise was still a sparsely-populated rural area with several other churches not far away. However, the building of the Slough Trading Estate after the First World War brought opportunities for better paid industrial work as opposed to employment on the local farms and nurseries. The railway stations at Burnham and Taplow served those who worked in the London area. 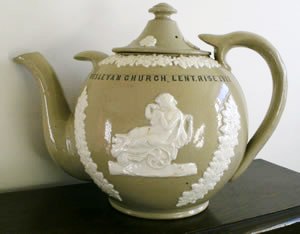 Mystery of mysteries! Where would the Methodist Church be without (yet more) tea? The history of this large teapot, inscribed WESLEYAN CHURCH, LENT RISE 1911, has been lost. If you can solve the mystery, the members of Burnham Church would love to hear from you! 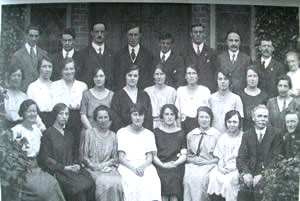 By the 1920s the Church was flourishing, with, apart from the morning and evening services and the afternoon Sunday School, a number of weekly activities. It was during the 1920s that this splendid choir won the local Methodist Churches' Eisteddfod. The conductor was Frederick Moon (front row, second from right).


The Wesley Guild was particularly strong with a varied and interesting programme, as illustrated by a small selection from the 1932 list:


The following year the Schoolroom was enlarged, and 30 chairs purchased at a cost of 4s.3d (approximately 21p) each. Strips of land on the Church site were let out for allotments. However, in 1958 Buckinghamshire County Council purchased some of this land to improve the "vision splay" [visibility] on the corner of Lent Rise and Eastfield Roads. The remainder became what was, by then, a much-needed car-park.

In the post Second World War years, an extensive rebuilding programme was put in hand. After the stone laying ceremony in 1957, 1958 saw the opening of a new vestry, cloakrooms, kitchen, double classroom and a large hall. It is interesting to note that the double classroom is still referred to as such by 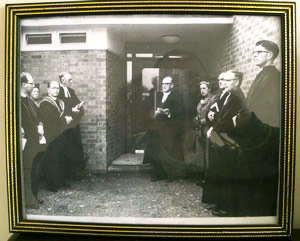 the "old-timers" although the double function disappeared many years ago! Newer members sometimes wonder what the "Oldest Inhabitants" are talking about! These premises, built at a cost of £9,200, were to become well-used. In January 1959 there were 120 children and young people on the roll, and the mid-week activities attracted a good attendance.

In 1962 the newly-refurbished Church was opened after a period in which all services had been held in the main hall. A new chancel and porch were built and the pews removed. The harmonium was replaced by an organ and the premises were opened by Mrs Elsie Moon. The Moon family had been active at Lent Rise since the very early days and members of the family still live locally. There is a stained glass window in the Church, dedicated to Fred Moon.

In the early 1970s, companies of the Boys' and Girls' Brigades were formed and continued until 1984. Sadly, the Youth Club was no more, but the Sunday School, although diminished, continued for many more years.

1981 saw the founding of the Association of Burnham Christians, a title suggested by Jack Jeffery, whose work for the Church and local community for many years is almost beyond praise. The Methodist Church took a significant rôle in this ecumenical group of local churches, which initiated and led a number of projects for some years. This included the great privilege of having Rev the Lord Donald Soper to preach at the celebration service to mark the conclusion of another successful "Burnham Week".

Some quiet years followed, in the 1990s and early years of the new century. However, the premises were well used by the community, and the Church-sponsored Thursday Lunch Group still continues, as does the Mothers and Toddlers morning, although the latter is no longer run by Church members. The church celebrated its centenary in 1997. 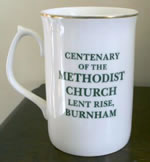 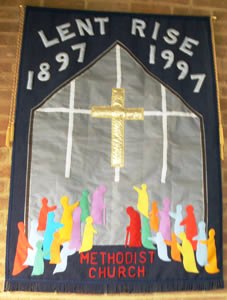 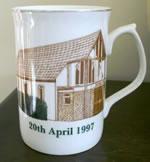 The church was refurbished in 2016-17, with the main worship area given a very clear and bright look and new heaters installed. On the wall there are now four banners, each depicting a season of the year — a gift from the Craft Group of The Well @ Lent Rise. 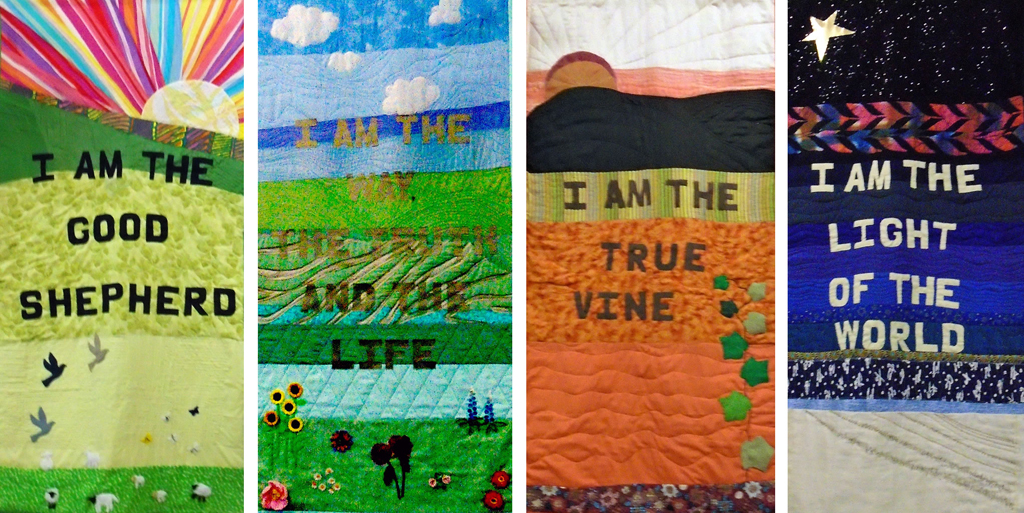 The Church at the Crossroads was always regarded as a focal point in the Lent Rise ward of Burnham. In recent years the Methodist witness has been revitalised by The Well @ Lent Rise, a Christian outreach group which uses the premises as a base from which to preach the gospel and to care, both practically and spiritually, for the local community.

The Thames Valley Circuit would like to express its appreciation to Burnham Historians for permission to reproduce the photographs of the Lent Rise Wesleyan Chapel and the Methodist Church Choir.