Mission - what is it?

"Mission is the participation of Christians in the liberating mission of Jesus. It is the good news of God's love, incarnated in the witness of a community for the sake of the world."


"Mission is quite simply, though profoundly, what the Christian community is called to do, beginning right where it is." From Transforming Mission, David Bosch (2000)

Mission in the Thames Valley Circuit

Our circuit summary included our detailed mission statement, categorised under the four sections of Our Calling:

On this page we concentrate on some of the ways in which we seek to SERVE.


Supporting our Mission: by the Circuit


Mission is so important, that we have dedicated pages on this website showing how we work in conjunction with key Methodist organisations which seek to promote, support and raise awareness about Mission in Britain and the World Church:

We are also actively involved in supporting Environmental organisations such as Fairtrade, and we work with Interfaith groups such as Windsor & Maidenhead Community Forum and Slough Faith Partnership.


Throughout the circuit we participate actively as a circuit, section, and/or individual churches, or ecumenically within village or town in events which are organised throughout the country, or, indeed, the entire Christian World:

Several of the galleries in our Photo Gallery illustrate these events, such as:

We hold Circuit Events with the emphasis on providing education and information, such as: 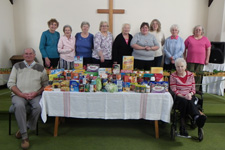 Many of our churches are involved individually, collectively or ecumenically in mission in the community, with

Supporting our Mission: by the churches


Quite apart from circuit events, each church holds its own special fundraising events such as Bazaars, Sales of Work, Brunches, Coffee Mornings, Lunches and Open Days — occasions which provide a chance to socialise — and (usually!) with refreshments.

To give a few examples:

Please refer to each individual church page (or church website) for more information.

The Circuit Mission Committee incorporated the circuit's theme for that year: Teach us to pray with a 24/7 prayer event at St Andrew's Slough from 4 pm on Saturday, 28th September 2013 to 4 pm on Sunday, 29th.

The Methodist Prayer Handbook caters for every Home and Overseas area in the course of a month. Each church was allocated specific days, and prepared a prayer station using one Home area and one Overseas area:

A pictorial record of the prayer stations is included in the Photo Gallery in the gallery entitled Prayer 2013.


This event gave the Circuit the opportunity to pray for the work that we raise money for, year in and year out.


The weekend concluded with a Circuit Missions Service, at which Rev Conrad Hicks told us about some of the challenges he faced and the work he did during his year in Mexico 2012-3. With an impassioned plea, he challenged all the churches to take a step forward in faith and prayer and increase their mission work in their neighbourhood.

The Circuit Mission Committee organised another highly successful Mission Weekend with a Prayer Safari at Windsor Methodist Church on Saturday and Sunday, 18th and 19th October 2014.

As in 2013, each church was allocated specific days from the Methodist Prayer Handbook and prepared a prayer station using one Home area and one Overseas area:

A pictorial record of the prayer stations is included in the Photo Gallery in the gallery entitled Prayer 2014.


The weekend concluded with a Circuit Missions Service, at which Mr Tony Miller told us some of his experiences working with the Whitechapel Mission.

Further Prayer Safaris have been held since then, as recorded in the circuit Photo Gallery.

For example, the one in 2016 concentrated on "Hospitality" with churches illustrating some aspects of the hospitality they offered — not just in the church itself, but in the wider community.